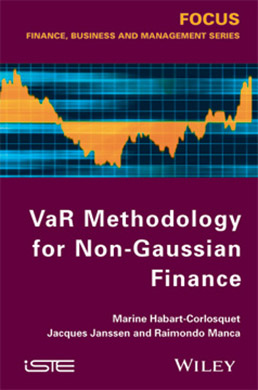 
With the impact of the recent financial crises, more attention must be given to new models in finance rejecting “Black-Scholes-Samuelson” assumptions leading to what is called non-Gaussian finance. With the growing importance of Solvency II, Basel II and III regulatory rules for insurance companies and banks, value at risk (VaR) – one of the most popular risk indicator techniques plays a fundamental role in defining appropriate levels of equities. The aim of this book is to show how new VaR techniques can be built more appropriately for a crisis situation.

VaR methodology for non-Gaussian finance looks at the importance of VaR in standard international rules for banks and insurance companies; gives the first non-Gaussian extensions of VaR and applies several basic statistical theories to extend classical results of VaR techniques such as the NP approximation, the Cornish-Fisher approximation, extreme and a Pareto distribution. Several non-Gaussian models using Copula methodology, Lévy processes along with particular attention to models with jumps such as the Merton model are presented; as are the consideration of time homogeneous and non-homogeneous Markov and semi-Markov processes and for each of these models.


Marine Habart-Corlosquet is a Qualified and Certified Actuary at BNP Paribas Cardif, Paris, France. She is co-director of EURIA (Euro-Institut d’Actuariat, University of West Brittany, Brest, France), and associate researcher at Telecom Bretagne (Brest, France) as well as a board member of the French Institute of Actuaries. She teaches at EURIA, Telecom Bretagne and Ecole Centrale Paris (France). Her main research interests are pandemics, Solvency II internal models and ALM issues for insurance companies.

Jacques Janssen is now Honorary Professor at the Solvay Business School (ULB) in Brussels, Belgium, having previously taught at EURIA (Euro-Institut d’Actuariat, University of West Brittany, Brest, France) and Telecom Bretagne (Brest, France) as well as being a director of Jacan Insurance and Finance Services, a consultancy and training company.

Raimondo Manca is Professor of mathematical methods applied to economics, finance and actuarial science at University of Roma “La Sapienza” in Italy. He is associate editor for the journal Methodology and Computing in Applied Probability. His main research interests are multidimensional linear algebra, computational probability, application of stochastic processes to economics, finance and insurance and simulation models. 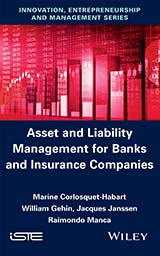 Asset and Liabilities Management for Banks and Insurance Companies