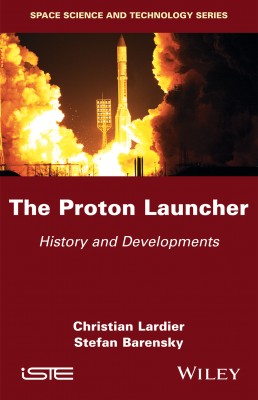 
The Proton launcher, which has completed over 410 launches since 1965, was the European launch system Ariane’s biggest competitor on the commercial market. It was developed by Vladimir Tchelomei, who inherited the German missile V-1 in 1944, carried out naval missions, and then became the principal competitor of Sergei Korolev, the founder of the Soviet space program.

This book is divided into two parts: “The Proton in the East” which relates the history of the launcher in the USSR/Russia, and “The Proton in the West” which tells the history of the commercialization of the launcher in the West thanks to the American–Russian joint venture, the International Launch Services (ILS), founded in 1995. This book incorporates the latest information unveiled by Russia.


Part 1.The Proton in the East
1. Vladimir Chelomey: From the V1 to Proton.
2. Chelomey’s Subsidiaries.
3. Intercontinental Missiles, Booster Rockets and Satellites.
4.Versions of the UR-500.
5. TheUses of the Proton.

Part 2.The Proton in the West
6. Saturn’s Rival.
7. Commercial Prehistory.
8. Friends or Foes.
9. The Transatlantic Alliance.
10. Standing the Test of the Market.


Christian Lardier, space journalist and historian, was Space Editor for the weekly magazine Air & Cosmos, for 18 years. He is the president of the IFHE, academician of the IAA, emeritus member of the AAAF and honorary member of the cosmonautic academy, RAKTs.

Stefan Barensky, space journalist for 26 years, was a consultant at Euroconsult and for the industry. He was then Space Editor for the weekly magazine Air & Cosmos for three years before he founded the magazine Aerospatium, where he has worked as the Editor-in-chief since 2015.