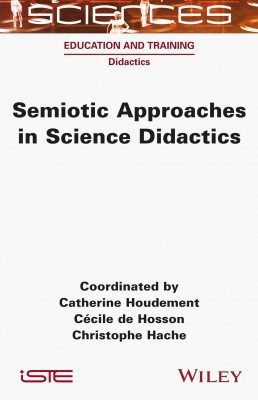 
The sciences are, in essence, highly semiotized. Our ways of thinking and communicating about science are based on permanent transformations from one system of signs to another, such as scriptural, graphic, symbolic, oral and gestural signs. The semiotic focus studied in this book makes it possible to grasp part of the complexity of teaching and learning phenomena by focusing on the variety of possible interpretations of the signs that circulate within the science classroom.

Semiotic Approaches in Science Didactics brings together contributions from didactic research involving various disciplines such as mathematics, chemistry, physics and geography, which mobilize different types of semiotic support. It offers the key to understanding and even reducing some of the misunderstandings that can arise between a speaker and a receiver in scientific teaching situations.


Part 1. A Study of the Dynamics of the Development of Scientific Knowledge: Semiotic Opportunities
1. A Walk in Semiotics and Mathematics by Catherine Houdement.
2. Semiotic Systems Specific to Chemistry and Their Learning by Isabelle Kermen.

Part 2. The Semiotic Approach: Toward the Invention of New Forms of Didactic Intervention
3. Scientific Knowledge at the Mercy of the “BD” Comic Strip by Laurence Bordenave and Cécile de Hosson.
4. The Map at the Heart of Disciplinary Learning by Sophie Gaujal and Caroline Leininger-Frézal.

Part 3. The Multimodal Semiotic Approach: A Look at Didactic Interactions and Cognitive Processes
5. Semiotic Modes and Models in Physics by Karine Bécu-Robinault.
6. The Didactic Effects of Semiotic Microphenomena in Mathematics by Edith Petitfour and Catherine Houdement.
7. Body, Matter and Signs in the Constitution of Meaning in Mathematics by Luis Radford.


Catherine Houdement is an emeritus professor at the University of Rouen, France. Her research in mathematics didactics focuses on semiotic issues.

Cécile de Hosson is a professor at Université Paris Cité, France. Her current research questions the links between scientific learning and comics.

Christophe Hache is a lecturer at Université Paris Cité, France. His research focuses on language issues in the teaching and learning of mathematics.